skip to main | skip to sidebar

I had a question about this recently. Sorry -- I lost the specific email into the mists of my Inbox, but anyways, here is my answer.

My dogs travel all the time with me in the car. They come along to dog shows of course but when they are little I bring them along on bank runs (the teller always gives out biscuits) even long before the puppies get to come along to the park.

Most of my dogs love going on car rides. But not Barbie. She was terrified of the car. Came out of her crate drooling so badly that she had looked like she had been under a hose.

To help her (and me), I started putting Barbie in the car in a gradient. First of all, I never put her in the car loose, only in her crate. A crate trained dog treats their crate like a security blanket. So first I put her in the car in my drive way for 5 minutes. Then I made it longer. Then I took her with me in the car. Not long trips, just around town. It was important to do frequent small trips. It was also important not to coo and sweet talk her in the car. I've always found that cooing tells the dog that there's something wrong. Eventually Barbie drooled less and less, until she stopped. She was never thrilled about car rides, but she ceased being terrified.
Posted by Sandy at 12:04 AM

Labels: How to de-terrify a dog from driving in a car.

Welcome to my Blog!

I'm so pleased you are checking out my blog. I feel that small dogs do not get the same training attention as bigger animals. It's the "Awwww, isn't he cute!" syndrome. Well, those of us who have lived with small dogs know that within their little bodies lives lion hearts, and they deserve and need consistent, kind training just as much as their bigger cousins. I'm speaking specifically not only of the toy breeds such a Chihuahuas, Poodles, Yorkies, Silky Terriers and Papillions, but also Dachshunds, Beagles, Shetland Sheepdogs, Cocker Spaniels -- basically any dog under 30 pounds.
My lawyer tells me that I have to let you know that you take my advice at your own risk. But I think you'll find my information simple and easy to follow.
Feel free to ask me questions, and if it's okay with you, I will answer them on the blog. I also have two articles available for download. One is "7 Things to Forget When You Get Your New Puppy" and the other is "Grooming the Long-Haired Small Dog". Email me at smesmer@yahoo.com and I will send them to you electronically at no charge.
If you are interested in my artwork, please visit my gallery at www.bergstromgallery.com. 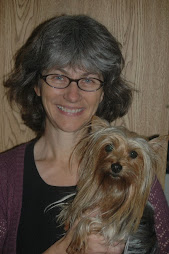 Sandy
Clearwater, Florida, United States
I have been breeding and showing Silky Terriers since 1981. In completing the championships of over 80 Silkys I have developed simple and logical ways to train small dogs, not just for the show ring, but also for the couch, the kitchen and the back yard. I get asked all the time for training tips so I thought it would be fun to start a blog about this. You can see my beautiful dogs at www.sandymesmer.com. I am a Maxwell nominated artist, specializing in canine art, (viewable at www.bergstromgallery.com) so my blog will have lots of pictures and a recurring cartoon, "Crazy Humans" lampooning the antics us humans get up to around our dogs. It's a wonder they put up with us!